CAN LOOSE CRYSTALS CAUSE DIZZINESS? 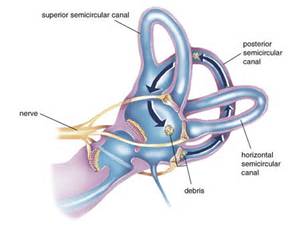 YES, ABSOLUTELY! The most common cause of dizziness seen in balance disorder clinics is Benign Paroxysmal Positional Vertigo (BPPV). BPPV is caused by loose crystals floating around in your inner ear that give inter-mittent abnormal signals from the balance sensor to produce the symptoms of vertigo and dizziness. BPPV can cause short-lived (generally less than a minute) episodes of spinning sensation (vertigo) that typically occur after a change in head position. On the other hand, it can also cause a more chronic and ill-defined dizziness, where every head movement produces unusual feelings but not necessarily a spinning sensation.

There are two broad categories of BPPV – primary and secondary. Primary BPPV is BPPV with no obvious cause. Secondary BPPV is BPPV caused by some other problem. Head trauma is one common scenario, but other inner ear problems such as Meniere’s disease (too much fluid retention in the inner ear), perilymphatic fistula (fluid leak from the inner ear), vestibular neuritis (viral infection of the balance nerve), and others can be the culprit as well.

Loose crystals can make you dizzy, but you don’t have to live with it!

-As seen in Sophisticated Woman Magazine